RSS
← Should I Audition for Book-It Generals?
eSe Taller: A Participant’s Take →

Our First Workshop: Inspiring and FUN!

Myra began with a little background on Book-It’s signature, trademarked style, and we found ourselves up on our feet, with a couple of warm-up and name-learning exercises. 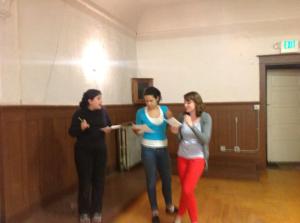 Then came the partner work, creating short, pieces together based on sentences we wrote down, then fished out of a hat. We were encouraged to use descriptive adverbs and adjectives to paint a picture, while we engaged in performing the actions in our text.

“You get to use words and descriptions that normally aren’t used in theatre, which makes it delicious!” mentioned one enthusiastic workshop participant.

Next, Myra provided us with some text she had brought in: one was a paragraph from an undisclosed novel; another was an already adapted scene from another novel. Two groups of 3 worked on the paragraph, while a group of 4 worked on the scene, and another participant worked on a monologue.

It was most interesting to see the two groups tackle the same passage of text in completely different ways, each melding the imaginations of the actors at hand with the provided descriptive paragraph. The pre-adapted scene gave us a great insight, as well, into the next phase of the Book-It style, and suddenly, the two hours were up!

“Wow, that was so inspiring. I feel envigorated and refreshed as an actor!” exclaimed another artist as we were headed out the door for the night. 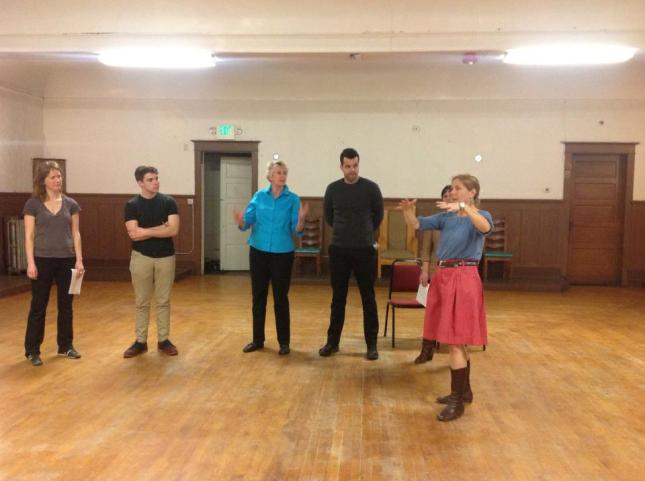 ← Should I Audition for Book-It Generals?
eSe Taller: A Participant’s Take →

One response to “Our First Workshop: Inspiring and FUN!”